A month back I blogged about wanting a better throughput scaling tools for DynamoDB. Not having been able to find an existing tool that ticked all my boxes, I ended up scratching my own itch and developed a small Java tool that runs in the background, monitoring a set of DynamoDB tables. The tool satisfy these requirements:

I ended up ditching requirement 5 and instead always scale up by the amount of throttled requests multiplied by a simple factor. If it gets it wrong, it can always scale up again later, since we don’t have any scale up count limitations.

So what’s the result? Here’s a table read example, first for three days, then just the last day: 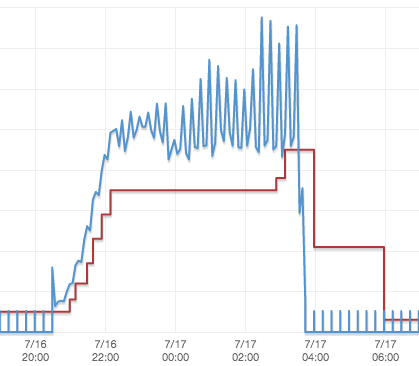 As we can tell, on this read case, the provisioned throughput is below the consumed throughput as we’re exploiting eventually consistent reads and their additional “free” throughput.

Also, we see delayed downscaling, as we need to be careful not to consume the 4 down scale opportunities.

One thing to note here: The system that is reading from the table will back off progressively if it gets a ProvisionedThroughputExceededException. Because of this, the throughput scaling tool doesn’t see the maximum required throughput rate immediately. This then creates a dynamic relationship between the consumer and scaling tool, resulting in the gradual increase from one level to the eventual peak rate at which the consumer is saturated by some other factors, like CPU or other external resources. It’s also interesting to look at the cross-table relationship, where a consumer reads or writes to multiple tables, where scaling one table also impacts the scaling of a second table.

In the end I’ve got myself a simple tool that does the job. This has both increased the performance of the DynamoDB table consumers as the tables get scaled up when needed, and decreased my cost because I can scale them down automatically when there’s little or no activity. A clear win-win!

Update 2016-06-23: After often getting emails about if I would open source this tool, I’ve now finally decided to do just that: https://github.com/cfelde/aws-ddb-management