Technical analysis and its dependency on volatility, the report

Some time ago I posted about the topic of my dissertation. There were some interest in getting access to the report when it was completed, and I’m glad to say that it’s finally done.

So if you want to go straight to the details, here’s the link: The profitability of technical analysis in a high frequency setting and its dependency on volatility.

There is a strong (significant) positive relationship between returns from these strategies and volatility. If you’re a prop trader you might be doing a face palm right now. But remember that academia have spent at least 30 years or so building a framework around the assumption that markets are efficient. Technical analysis shouldn’t in that context be able to produce any abnormal returns, so we need to play at that field when testing these things. I am however delighted to see an increase in fields like behavioral and emotional finance as that surely is the only decent way forward in distancing academia from its extreme views.

So what does that relationship imply? Well, since volatility is fairly easy to “predict” as it is rather persistent, this also allows us to know when you should deploy or not to deploy technical analysis. That allows us to vastly improve our trading results compared to either always using technical analysis, or worse, purely rely on a long only buy-and-hold based strategy.

To produce these results one minute OHLC bars was used, analyzing the 15 biggest (in terms of trading volume) companies currently part of the S&P 100. If you’re interested in how this was analyzed feel free to contact me. Most of the software was Java based and custom made by me, deployed across a cluster of Linux servers. With over 12 years of data doing daily parameter optimization and back testing, that amounts to about 30 TB of analyzed data.

The profitability of technical analysis in a high frequency setting

UPDATE: The report has been completed, available here.

One busy month behind me, and another one up next. Currently doing exam revisions and had some rather time consuming coursework so far, which has sadly prohibited me from doing anything here on this blog. So, to make up for a month of no blog activity I’ll set aside some time doing it now.

This blog post is going to be about my upcoming dissertation. I’m writing about the profitability of technical analysis in a high frequency setting. I’m also going to be looking at any possible link between this and volatility. And, I’m very much interested in any feedback, tips, information, or what ever you think you might want to contribute. Any specific papers you think I should read? Other sources of interesting information? Please post feedback as a comment here, or contact me directly.

I’m copying and pasting in some of what I’ve written to introduce my dissertation project. A PDF is available here with the complete content, also containing the bibliography.

END_OF_DOCUMENT_TOKEN_TO_BE_REPLACED

A deep dive into the January barometer

So as it’s still a rather fresh 2011, and January so far is looking a little mixed, I thought it would be fun to do a deep dive into a calender effect called the January Barometer. Many people seem to confuse this with the January Effect, but they are different things.

The January barometer states that the direction (of the S&P 500 at least) during January can be viewed as an indicator for the following 11 months. So in other words, if the S&P 500 ends up this January, that would be an indication of a good coming year overall and vice versa.

There’s no specific reasoning given for why it should be like this. One could theorize that there might be some form of structural break as we enter a new year with new budgets and everything. So say the general economy was heading up, then more would be invested, starting in January and then continuing.

But why just theorize? There’s easily available data we could download and look at. And that’s just what I did.

With Yahoo as my source I downloaded all their data on the S&P 500 index. That’s data from the start of 1950 up till today. I feel it’s important to check if the effect is equally reliable for both up and down moves as there’s 43 positive years and only 18 negative. So ignoring the negative predictability would be rather stupid with such a positive bias. Then again I guess one could argue there’s not enough data on the negative side, but it’s all we’ve got.

Next step is to organize the data. I took the returns of each month and then grouped them into two columns: The first column contains January, with the second containing the compounded returns of the following 11 months. Looking at data from 1950 till 2010 that gave me the following results:

That doesn’t look too bad. Both the positive and negative predictability power is even and at around 70%. 50% would be like flipping a coin, and anything consistent above 60% wouldn’t be too bad.

By taking the data and shifting it one month forward (in addition to cutting it a year at the end to maintain balance), I performed the same analysis for the other 11 months. So, does February predict the returns for the next 11 months, etc.. The results are shown below. 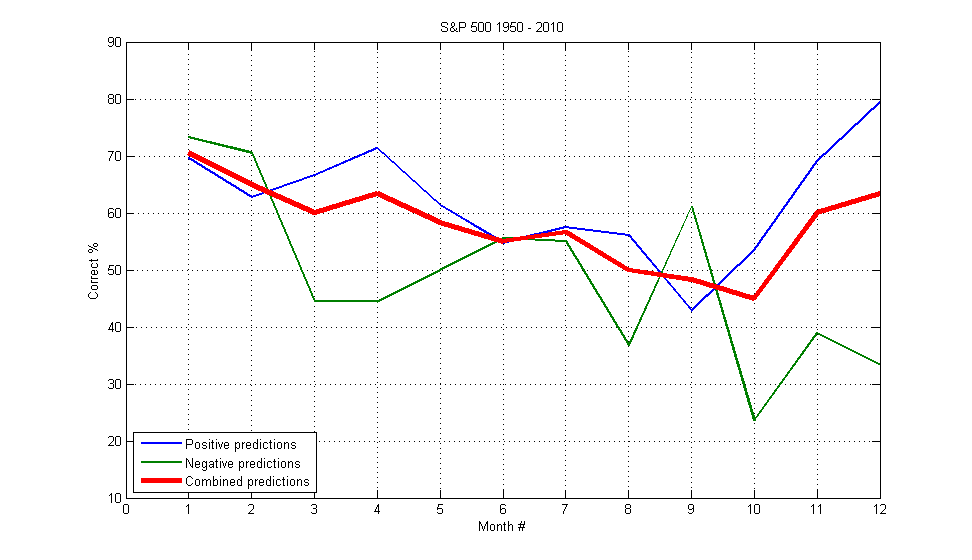 There seems to be a clear reductional trend in predictive power as we go further out, with diverging behavior at the end. But besides from that last part, this is what I guess we could expect from the January barometer. January results contain predictive properties for both positive and negative directions while the other months show weaker or no predictive power.

But is this the complete story? I’m not so sure, as there’s been people talking about a loss in this predictive power over time. So let’s check the data ones more, but now by splitting it into two periods: One from 1950 till 1984, the other from 1985 till 2010. 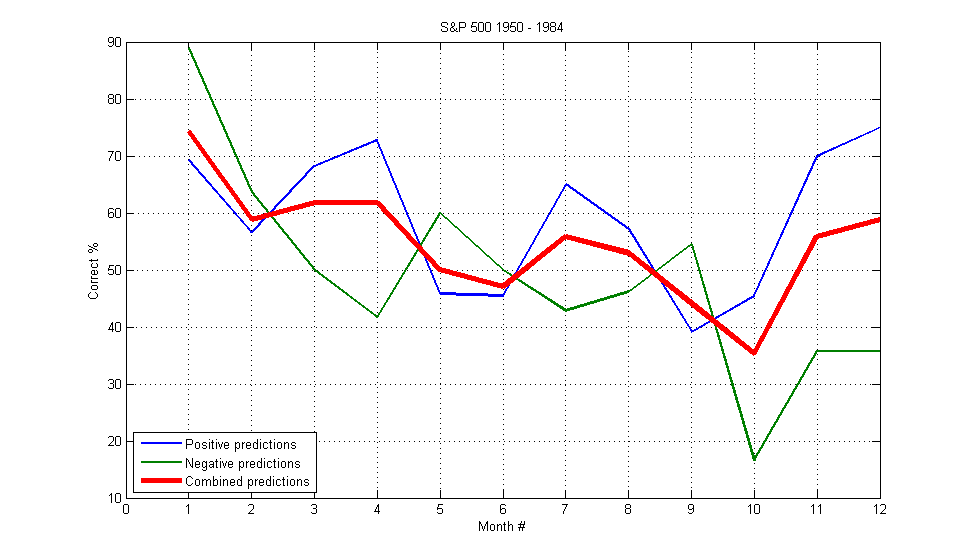 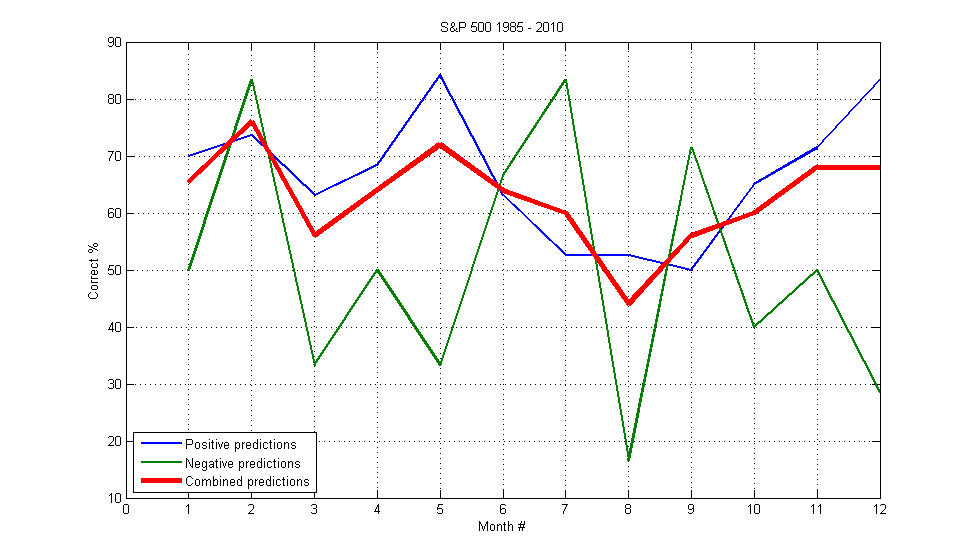